A collection of articles on structural integration and myofascial techniques.

The Vagus Nerve: From Animal Spirits to Poly Vagal Theory

This article traces the development of our understanding of the ANS and the vagus nerve in particular, from the Greeks, to the modern era of Gellhorn, Selyes, Levine and Porges. It will appear in the September issue of Advanced Clinical Education

The notion that the body was fundamentally divided into two systems, an animal (somatic) and organic (autonomic) originated with the ancient Greeks. (Clarke E, 1987).  In the second century AD, Galen was able to follow the vagus nerve from the cranium, exiting the jugular foramina and travelling to the organs. (Clarke E, 1987)The Latin word vagus means wandering or rambling which is the type of journey the two branches of that nerve make through the thoracic and abdominal cavities. Galen also identified the sympathetic trunks as crossing the ribs and communicating with the organs via plexuses. He was able to identify most of the cranial nerves but incorrectly grouped the glossopharyngeal, vagus and accessory nerves within the sympathetic trunk, his sixth cranial nerve. Galen saw the nerves as pipes, allowing “animal spirits” to pass between the organs, a process he termed “sympathy”. (Webber, 1978)

Dr M.S. Ajimsha (PhD Physiotherapy) and colleagues conducted a study on the effectiveness of myofascial release in lateral epicondylitis. The author acknowledged the techniques were in part based on those shown in Michael's book Direct Release Myofascial Technique. This study provides evidence the MFR is more effective than a control intervention for lateral epicondylitis in computer professionals. To see a more detailed description see:  Archives of Physical Medicine and Rehabilitation.

To investigate whether myofascial release (MFR) reduces the pain and functional disability of lateral epicondylitis (LE) in comparison with a control group receiving sham ultrasound therapy in computer professionals. 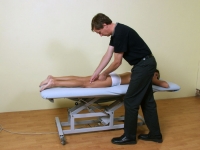 In a recent AMTA survey, the number one issue of concern to therapists was not practice building or increased income. It was how to minimize wear and tear on their bodies.1 It raises the question - just how should therapists use their bodies as they work? In Australia, another survey revealed that the average working life of a therapist is just 3.5 years. Burn-out was listed as the main reason for leaving the profession. There's no escaping the reality that massage therapists do physical work and that takes energy. This understanding is a kind of "Physics 101" reality - work takes energy. Energy conservation for a therapist means getting better at understanding how to use their most essential resource – their own body.

"Michael is a rare beast: an exceptional and world renowned therapist and a communicator of distinction. In his invaluable book, he communicates powerfully with the reader on many levels, just as a truly effective therapist does with his or her clients. I keep returning to this book. It has a personality, thoroughness and depth rare in texts for practitioners."
- Kirtsy Elliott, MT, BA (hons), Dip Ed (Melbourne Uni.), Former Senior Editor at Harcourt Education

"The way he teaches the techniques shows a lot of respect for the client. I love the book."
- Dr. Herbert Grassman, Advanced Guild Practitioner, Founder of SKT® and Trauma Somatics

"This book offers an excellent pictorial respresentation for this method. I rate it 9.5 out of 10."
- Jeffrey Kintish, DC. Reviewed in Dynamic Chiropractic